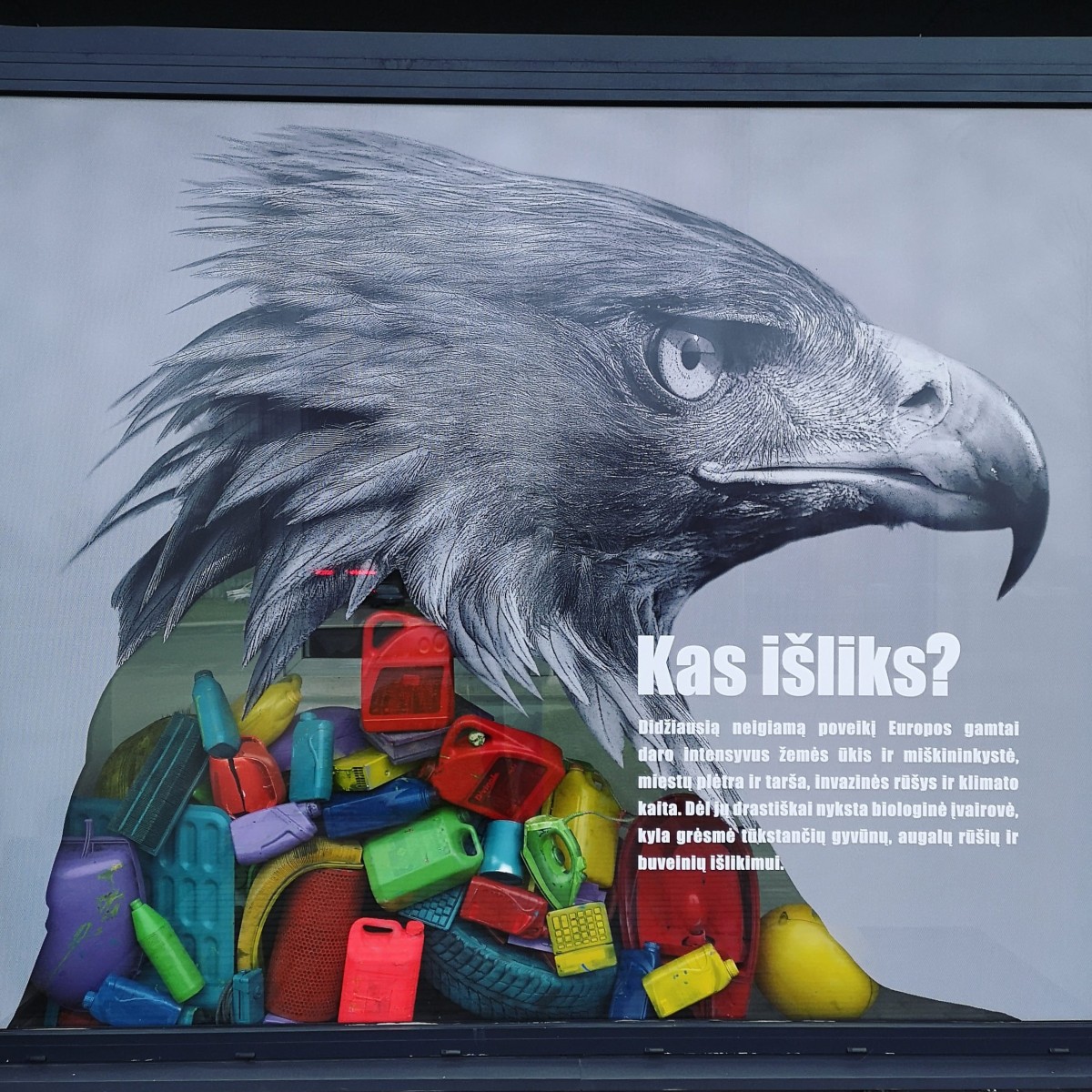 ‘Who will survive?’ asks an impressive looking eagle located in Kaunas, Palemonas Street, looking out of the showcase with a penetrating look. The message of the showcase, which certainly manages to attract the attention of the townspeople, is intended to draw attention to the problems of environmental protection and endangered biodiversity – in a stylised showcase created by artist Rolandas Žigonis, the eagle’s body is filled with plastic and hazardous waste.

Such an artistic installation is a shared idea by the hazardous waste management company ‘Žalvaris’ and Rolandas Žigonis. The image of an eagle adorning the showcase of the company’s central office is a kind of reflection of the intensity of human activity and consumption.

‘For the last few years, I have been very interested in environmental topics and used them as my inspiration for creative work. Last year, in cooperation with ‘Žalvaris’ and Algis Kriščiūnas, we presented the project titled ‘Holy Trash’, in which we emphasized the damage caused by plastic to nature by depicting famous people. I am personally very interested in this topic, therefore I instantly agreed to participate in this project as soon as I heard about the idea of this showcase’, said Rolandas Žigonis.

The idea to create something and use the previously empty showcase located at number 1, Palemonas Street, came naturally. According to Eglė Berentienė, Head of Marketing and Communication at ‘Žalvaris’, there were two main criteria for adorning the showcase: the showcase had to communicate an important message to the society, and the stylistic execution had to use the items in the company’s warehouse. ‘We have been cooperating with Rolandas for some time now, so I chose him and suggested to contribute to the implementation of this project. When we started generating creative ideas, the report of the European Environment Agency on the endangered nature of Europe had just been published – it became the starting point of our project’, says Eglė Berentienė.

Every six years, the European Environment Agency presents an integrated report on the state of nature, protected animal and plant species and their habitats in the Member States of the European Union. A report published at the end of October this year, covering the period from 2013 to 2018, states that Europe’s nature is declining and is being hit hardest by intensive agriculture, forestry, invasive species, urban development and related pollution, and climate change.

‘Instead of portraying any animal in the showcase, we purposefully chose the eagle – a majestic bird, which is like a symbol of the scale of changes in nature and communicating the message that the threat of extinction is real and affects everyone, even the strongest. The processes that take place in nature are irreversible, so action needs to be taken here and now’, says the Head of Marketing and Communication at ‘Žalvaris’ when asked about the creative idea.

According to her, the upcoming holidays with their inevitable shine, bustle and all the usual attributes of abundant purchase, consumption, and returning purchased items, is the best time to think about the most important things and ask yourself unanswered questions: why do we need all this? Also, who will survive?

The symbol of freedom was not chosen by accident

The eagle, as the central axis of the showcase, was also chosen for symbolic reasons. According to Rolandas Žigonis, in various cultures this majestic bird is depicted as a symbol of a strong spirit and freedom, and freedom is definitely important in this environmental context.

‘Although it seems to us that we are free, but the spirit has become imprisoned, we are trapped in our own traps. We live in a very complex ecosystem and we are closely connected to each other. We think that we are free, that we can buy what we want, go where we want, celebrate the way we want, that we have the freedom some people could only have dreamed of, but in the end we have become hostages of it all – biodiversity is disappearing and if we do nothing, we will all travel into oblivion’, warns Rolandas Žigonis.

This context helps to find clearer answers to the question raised in the showcase – who will remain? And while there is no single opinion, the artist is convinced that planet Earth will survive, and whether we want to live in it, it is really for each person to decide. ‘Man has a huge impact on the planet, so even if the day comes when life is wiped out by tsunamis, a billion years will pass and it will flourish again. The only thing that we can easily destroy by acting unconsciously towards the environment is ourselves’, says Rolandas Žigonis.

As soon as the idea arose, the creative process didn’t take long to start: we had to choose an effective photo of the king of the sky – an eagle – for a sketch, and select the waste that had become the raw material of the project.

Wastes were chosen for the showcase according to their danger to the environment, in addition to the aesthetic sense, combining them with the general style of the showcase. The showcase, or the eagle’s body, is filled with tyres, car filters, contaminated plastic tanks, radiators, and electronics, such as keyboards, teapots, computers, even irons and calculators.

The expressive showcase has already managed to get reactions from the townspeople – they stop to look at it, think, are interested in the relevance of the idea and its aesthetic fulfilment. ‘When you see an eagle filled with waste, different thoughts arise, but the message is clear to everyone – we must do something about it. I am glad that this image of an eagle has started to live not only in this showcase, but also in people’s minds, giving every person something to think about’, says Rolandas Žigonis.

This work continues to inspire both Rolandas Žigonis and ‘Žalvaris’ to a possible continuation of the project – perhaps more showcases focused on environmental topics will soon appear in Kaunas? Will a social project emerge from this? Although human activity is gradually warming the climate on a daily basis, increasing pollution and the amount of plastic are some things that can still be controlled. And a creative approach to current issues encourages people to think more broadly and to evaluate problems from a different angle.