The Dakar Rally trace: a tonne of waste from A. Juknevičius' team car alone 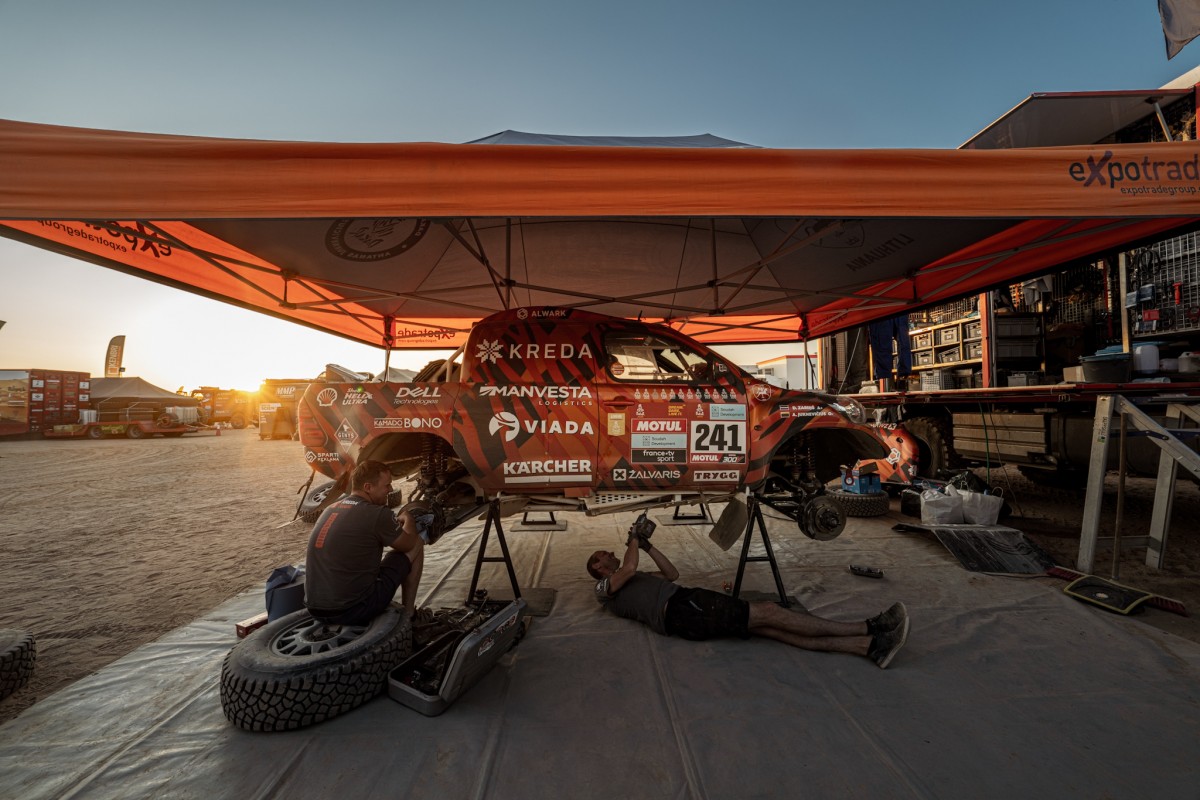 For motorsport enthusiasts, the Dakar is arguably the most anticipated event of the year, attracting more than 1,000 drivers and half as many vehicles from 63 countries. But when the two-week spectacle is over, the applause dies down and the dust settles, huge quantities of unusable automotive parts remain. This year, the Dakar Rally legend Antanas Juknevičius and his crew brought from Saudi Arabia and delivered to Žalvaris, hazardous waste management facility, nearly a tonne of various automotive waste – tyres, automotive parts and fluids.

"Just like in everyday life, the main polluting automotive parts in the Dakar Rally are the tyres that wear out quickly – 20 pcs. of them were collected this year. The second place was taken by rims, of which A. Juknevičius' team collected 10 pcs., and the third place was taken by 8 brake discs. In addition, 20 litres of various fluids, 2 engine protectors, a bunch of various levers, hinge pivots, pumps, links, fans, bumpers, grids, fenders and fender flares were delivered," Romas Mižutavičius, Director of Logistics at Žalvaris, hazardous and non-hazardous waste management facility, that helps the Dakar Legend's team to take care of their waste, says.

According to him, the quantities do not seem so large at first glance, but when all the waste was added up on the scales, the total weight of the waste amounted to one tonne, more than half the weight of a car. The number of vehicles involved in the two-week rally means that hundreds of tonnes of hazardous automotive waste are generated.

Collecting and properly managing automotive waste from racing is essential as it is polluting, long-lasting in nature and often highly toxic. Professional motorsport inevitably leaves its trace, but nowadays we have many opportunities to reduce the impact on the environment," R. Mižutavičius says.

In the Dakar - increasing focus on waste management and environmental protection

"It is important to note that the tonne of automotive waste brought to Žalvaris is a relatively small amount compared to the scale of the Dakar Rally. Kreda is not a big team, and we want to use the resources we have as rationally as possible without wasting them. In bivouacs between the speed sections, the factory teams change automotive parts actually every day, even if it is not necessary. Most of the time, they do it out of spite, because with large resources, they think about what is best for the vehicle, even if it is not the best solution in terms of environmental pollution," A. Juknevičius says.

According to the racer, the organisers of the Dakar Rally have already been talking about the environmental protection for some time, urging teams to find solutions that have a lower impact on the environment, and this year we have already seen the first successful debut of the Audi RS-Q e-tron electric car. In fact, the car is partly electric, and the Dakar will have to wait for a fully electric one. The latter are not only fuel-efficient, but also have fewer moving parts overall, no filters, no oil, and are therefore overall less polluting.

"At the end of each speed section, used parts and other waste are delivered to a collection point by the biggest teams, and taken away by teams of our size and delivered on the only rest day at halfway through the race. The Dakar has ensured conditions to drop off fluids and tyres, but it's a bit more difficult for parts that "leave" the car body due to an accident or wear and tear. Here, the organisers are ruthless – they require to return with a fully equipped car. For example, there is a fine of EUR 2,000 for every tyre lost. But overall, the race is much cleaner now compared to a decade ago, when it was normal to pour oil into the sand and leave hazardous waste near the speed sections," A. Juknevičius says.

He said that the Dakar organised the election of the environmentally friendliest team "Eco Label", which not only evaluates the sustainable solutions applied to the race cars, but also the team's overall approach to the environment, the use of renewable energy in in the service chain that serves the team. Kreda won the award for its solar power plant on a service truck, and this year it has already installed on the team's camper.

Žalvaris, the largest hazardous and non-hazardous waste management facility in Lithuania, is the official partner of Antanas Juknevičius' team Kreda in the Dakar Rally.

Moments of the meeting in this video > https://youtu.be/ozZzYr6Ry44