The future of the Dakar: electric cars, renewable resources solutions and the environmental protection 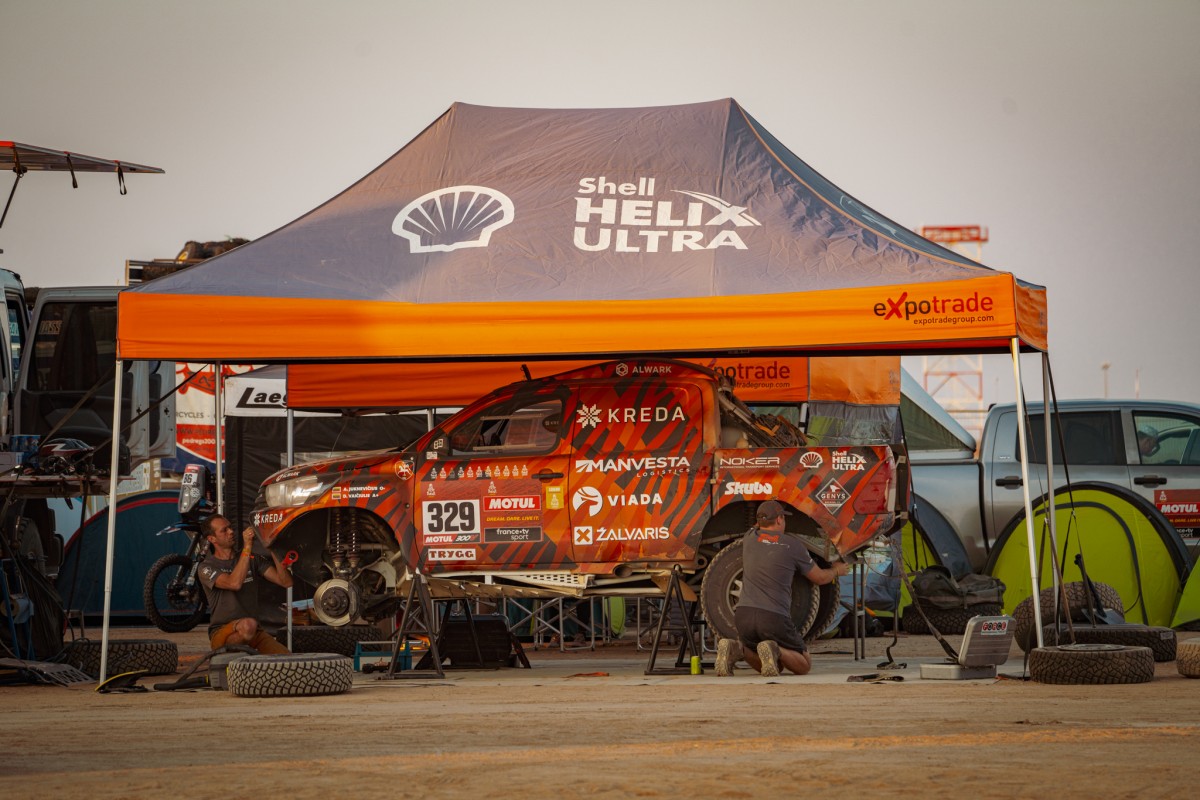 The Dakar Rally is one of the largest motorsport event of the year. Dusty distances, extreme situations, adventures and adrenaline are what attract many motorsport enthusiasts. Automotive waste is an integral part of the sport, and to make the Dakar more sustainable, preventive measures have been introduced to reduce pollution, such as fines of thousands of euros for tyres or hazardous liquids left in unauthorised places. Meanwhile, the team of Antanas Juknevičius, recognised as the Dakar legend, is a kind of flagship in the environmental field, using a solar power plant for the fifth year of the Dakar, which is attracting more and more attention every year.

According to the World Health Organisation, vehicle emissions contribute to 4 out of the 5 largest sources of air pollution. Electric motors are slowly making their way into our everyday lives and although motorsport is moving more slowly in this direction, the long-time Dakar participant Antanas Juknevičius says that his team is looking forward to the arrival of hybrid and then electric race cars.

"Electric cars are the future, and they will be in the Dakar too, it's just a question of when – after five or seven years – but the fact is that we will refuse internal combustion engines, and all engines will be green. We will first pass to hybrid ones, because it is quite difficult to adapt an electric engine to the Dakar, but I am sure that they will be also replaced by electric cars," the racer says.

Paulius Repšys, a representative of Žalvaris, the hazardous waste management facility, who has been cooperating with A. Juknevičius' team for almost a decade, supports him. According to him, electric cars are indeed improving rapidly, the Dakar organisation itself and the attitude of athletes is changing.

"Electric cars are already making their way into the Lithuanian and global fleet, so sooner or later they will reach the Dakar. When that happens, participants should also be ready to take good care of worn-out batteries. Like tyres, end-of-life car parts or hazardous liquids, electric car batteries contain harmful substances and cannot be left in the sand dunes or anywhere else – they will also have to be delivered for recycling," Paulius Repšys, the Development Director of Žalvaris, the hazardous and non-hazardous waste management facility, notes.

According to him, as in the case of tyres and other hazardous waste left in unauthorised places, the Dakar organisers shall also apply financial measures to batteries, so proper management of this waste will not only help the environment, but will also pay off for athletes themselves.

"Ensuring proper waste management for the organisers of the race, which stretches for thousands of kilometres, is extremely difficult, but it is really possible with the efforts of all participants," P. Repšys says.

While the electric racing cars are left for the future of the Dakar, A. Juknevičius' team is applying more environmentally friendly solutions and renewable resources to the team’s service vehicles. In 2018, they used solar modules from SoliTek, a Lithuanian manufacturer, for the first time in the Dakar, for which they were recognised as the most environmentally friendly team by the Dakar organisers and awarded the Eco-Label eco-certificate.

"I can't imagine what could be better than the sun – the energy it generates makes us quiet and ecological. Saudi Arabia has no shortage of sunshine, so we can generate plenty of electricity, enough for full maintenance and charge of all the equipment we need," A. Juknevičius says.

Julius Sakalauskas, the CEO of solar technology company SoliTek, is pleased that A. Juknevičius' team is successfully using solar power for its needs in the Dakar. This year will be the fifth Dakar where a solar power plant with 2 kW of double-sided modules has been installed on the roof of the team's support truck, covering a total area of 10 square metres.

"Pure glass modules made in Lithuania can reliably withstand the most extreme conditions – 50 degree heat, high vibrations, sand and dust storms, which are not lacking in the windy Arabian Peninsula. A power plant of double-sided, long-lasting and durable tempered glass solar modules absorb light energy not only from the top but also through the underside of the modules. Because they are installed with a 5 cm gap from the white roof, they absorb the sun's energy reflected off the car and generate up to 10% more electricity," J. Sakalauskas says.

The truck is also equipped with lithium-ion batteries to meet the team's day-to-day needs for operation of computer systems, lighting and other applications.

This year, A. Juknevičius' team is preparing something new for the Dakar: it will have a solar power plant not only on the roof of its service car, but also on the roof of its new recreational vehicle (camper van), which will accompany the team throughout the race.

"The electrical system of the camper van is unique – a system of advanced double glass solar modules with a total capacity of almost 1.5 kW will supply the powerful integrated batteries with electricity during daylight hours. These solar modules are made of special glass that does not stick to sand and dust. Once the batteries are fully charged during the day, it will be possible to use electricity for all your needs and even those of your neighbours all night long without any restrictions," J. Sakalauskas says.

"Besides solar power, the Dakar's electricity is generated only by fuel-powered generators, which means not only pollution for the environment and the air, but also a lot of noise. Meanwhile, our camp becomes like a harbour of silence and fresh air in the whole bivouac – I sometimes say that this is one of the disadvantage of solar power, because at night the other teams put us in tents from all sides. However, we are happy that we are setting a good example, and every year more and more teams are interested in our solution, and having a spare minute, engineers come to see and ask how our solar power plant is set up," A. Juknevičius says.

In 2022, the Dakar Rally will take place for the third time in Saudi Arabia from 1 to 14 January. Antanas Juknevičius is the most experienced Lithuanian Dakar racer, and this will be his 13th Dakar start. He has three times improved the best result in the car category due to the Baltic countries and in 2018 was officially recognised as a Dakar Rally legend by the organisers themselves.